INDIA TRAVELS is now available for sale! Click on the blue hyperlink below to be spirited away to Amazon. If you do make a purchase, please remember to leave a review after you have read the book! 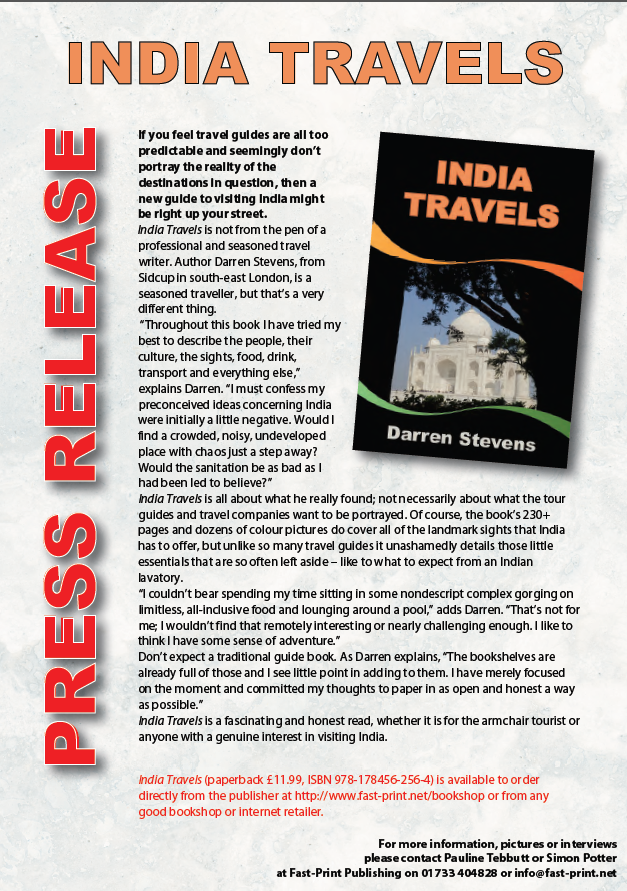 This was to be my first trip to India, a new subcontinent even and I have to say I was looking forward to the visit immensely. Even the preparation, which had taken up a lot of my free time, was a hugely enjoyable experience. Before I embark on my foreign travels I do have a tendency to put a lot of thought into the choice of destination as well as the activities. They have to be interesting in some way or serve a purpose. I couldn’t bear spending my time sitting in some non-descript complex gorging on limitless all-inclusive food & drink. Or worst still, lounging around a pool just counting off the days whilst burning my skin. That’s not for me, I wouldn’t find that remotely interesting or nearly challenging enough. I like to think I have some sense of adventure and whilst my trips are hardly unique they are often memorable.

India was selected on this occasion mainly as it is home to the famous Taj Mahal, one of the ‘Seven Modern Wonders of the World’. As I write I have already visited Petra in Jordan, the Colosseum in Rome and The Great Wall of China and I am looking forward to completing the set. The remaining sites: Machu Picchu (Peru, 2016), Christ the Redeemer (Brazil, 2017) and Chichen Itza (Mexico, 2017) are all in the planning stage. Hopefully they will be completed before I reach the milestone of fifty years old, which is approaching all too fast!

I must confess my preconceived ideas concerning India were initially a little negative, probably similar to yours are now if you have never been. Would I find a crowded, noisy, undeveloped place with chaos just a step away? Would the sanitation be as bad as I was led to believe? I understood the necessity to drink bottled water, I have experienced that in other countries, but what about the food? Presumably it would be washed in tap water during preparation and as a result something to be wary of? Is Delhi-Belly entirely a result of poor sanitation or partly due to a change of diet?

My initial reservations were of course somewhat due to carrying out my research via the media rather than speaking to people who had actually been. Television shows, newspapers and various internet channels prefer to shock or make the stories more interesting to suit their own purpose. I really had to wait and see the real India for myself before passing judgement, it is easy to criticise from afar. Over the years I have learned, as a well-seasoned traveller, that things are often very different once I am on the ground. So before I left I decided to keep an open mind throughout the trip and judge things for myself at first hand. My willingness to adapt and open mindedness are traits I am proud of and I always urge others to adopt a similar outlook whenever possible.

Throughout this story I have tried my best to describe the people, their culture, the sites I visited, history, the various religions, food, drink, transport and anything else that sprang to mind at the time. I have also included some prices in Indian currency in order to make sense of the value of items in India. Divide the amount by one hundred for an approximate price in English pounds. American Dollars works out at approximately fifteen to one thousand rupees (Rs.1000).

India was a long way to go just to see the Taj Mahal so to get the most out of the trip I also selected a number of other places in the Northern part of the country. With some guidance from the booking agent I allowed for stays of up to two days in each location. Typically the first day would involve a few hours of travelling before settling in at the hotel for some rest and relaxation. The next day I would embark on a city tour accompanied by a knowledgeable local guide. Part of me considered these travel and rest days a bit of a waste of time. A missed opportunity as time was limited. But on the other hand if I was relaxed I could take in the sites and enjoy the experience even more. We have all been in a situation where tiredness plays a negative part in festivities or events of some sort haven’t we?

I debated long and hard over the choice of sites and places of interest. It would have been easy to choose the popular golden triangle route of Delhi, Jaipur and Agra and return home. But then the trip would have been far too brief for my tastes. I had two weeks to see as much of the north as it was practical to do without madly dashing around.

I began with the Capital, Delhi where I was advised it would be interesting to explore both the old and newer parts of the city. As complete a contrast as it was possible to imagine. Then it was on to the pink city of Jaipur where forts, palaces and an outdoor observatory awaited. Leaving the cities behind I headed for the safari park at Ranthambore, to see tigers and other wildlife in their natural habitat. This rural setting also provided an opportunity to visit areas where the farmers lived out their peaceful lives, far away from the hustle and bustle of the city.

Now fully acclimatised I headed to Agra and the Taj Mahal, the main purpose of the trip. Pictures and video can only show so much, to touch and even smell these iconic structures is what travelling is all about for me. This part of the trip would also determine the success of my time in India. If all went to plan in Agra then I would return home contented that my goal had been achieved, regardless of any other mishaps along the way.

The last areas to visit were places suggested my booking agent and not sites or areas I had even considered. First there was the trip to see the temples of Khajuraho, which are apparently the second most popular site in India (after the Taj Mahal, obviously). I have to confess I have never heard of them, but I added them to my list nonetheless, based on the recommendation. Then, before my return to Delhi, I would take a short flight to Varanasi. There I would find the home of the Lord Buddha, watch an Aarti ceremony and take a boat ride on the Ganges River.

I would describe this book as a beginner’s guide, not the last word on India and certainly not a detailed guidebook in the formal sense. The book shelves are already full of these types of books and I see little point in adding to them. No, with my musings I have merely focussed on the moment and committed my thoughts to paper in as open and honest a way as possible. Overall I found India to be a fascinating country to visit, full to the brim with differences from my own country of England. The place was a writers dream in that regard.

Well, I hope you enjoy reading about my adventures as much as I have enjoyed writing about them. If you do feel inspired to travel to India yourself I am sure you will find, as I did, a warm welcome awaits.